We are Run by One of the Top Rated CEOs! 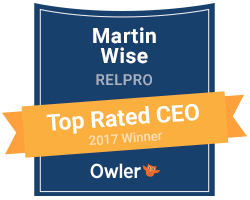 Owler recently announced 2017 Owler Top Rated CEO Awards, which highlights the highest-rated leaders across 50 cities and 25 industries. This Community-based business insights platform distributes 1,000 awards among 167,000 CEOs, awarding the top 0.60 percent of CEOs. Gladly, (but not at all surprisingly), our very own CEO, Martin Wise, made the Top 100 lists with a whopping 99.2% approval rating.

I could go on and on as to what makes Martin a worthy winner and why he is a great CEO to work for. However, the opinion of one person may seem skewed (especially from the person responsible for marketing!) So instead, here are the opinions from some of our team members :

“Martin’s leadership at RelPro is driven by his integrity to always give the customer the best effort that he and the company can give. This defining trait is one of the key factors that has allowed the company to achieve its current levels of growth and success” – Raaj Rajmangal, Head of Technology

“Martin believes in his team. He empowers us all to make decisions and have a ‘real say’ in the company’s path. I have enjoyed working with him these past several years and he has allowed me to grow with the company. I thank him for giving me the opportunity to do so” – Lance Rosenthal, Customer Success Manager

“I have been working with Martin Wise for almost seven years. He always demonstrates a sharp mind, business competence and accountability. We as a team trust Martin as CEO and believe in the success of the business. Very important to me is his warmth, empathy and positive attitude.” – Yefim Plutov, Sr. Software Developer

“Martin is a hands-on CEO who’s quick to share his knowledge and experience, but open to ideas from everyone on the team.  He creates an environment where we all feel like valued architects of RelPro’s success.” – Diane Pabst, Business Development Manager

“I know Martin just a few months but I feel we have been working together for many years.” – Igor Gusman, Sr. Software Developer

“I’ve never met a leader before who cares more about their employees and customers, than Martin. His emphasis on a positive work environment and care for our customers is, in my opinion, what has led to RelPro’s strong growth trajectory over the past few years” – Lauren Meyers, Customer Success Analyst

“Martin is a CEO who believes in giving utmost quality and value to the company’s customers. He is very encouraging and makes everyone around him feel like we are all on a team.” – Cynthia Chan, Software Developer

So what does the humble winner think?

“I am honored that the RelPro team’s efforts have been recognized in this way – our company’s growth momentum is the result of a great team contribution that I am lucky enough to be a part of” – Martin Wise, [Top-rated] CEO

Sanya Khanna is a Business Development Analyst at RelPro.

What our clients say

"RelPro gives us a real advantage in researching prospective clients – it’s an efficient and insightful source of client data and relationship intelligence. Our entire sales team now uses RelPro and we all agree it’s the best prospecting and lead generation tool out there."